Fatigue.  It the kind of tired that "stops in your tracks cause I can't go anymore" feeling unlike any other lethargy I've ever experienced--until PCD (post cancer diagnosis)

This syndrome has been delivered via the medication that is prolonging my life.  I'm not complaining, well, yes I am; but when it strikes, collapsing in a nearby bed is the only option until I can return to my "normal" way of living.  As the Brits would say, "carry on" and I do with a grudge against this malady I must frequently endure.

Which brings up another type of fatigue I am experiencing.  Cancer fatigue.  After five years of living with this disease, I am tired of it being forefront not only in my body but also in my mind.  My initial diagnosis was a year of hell with chemo, radiation and surgery and the constant side effects.  The next year was a recovery year where every day I felt my body being restored until twenty months later I was slammed with a metastatic diagnosis.

It has now been five and a half years of a thinking breathing living cancer existence and I am fatigued by it all.  Not only is it physically wearing but the mental part is completely exhausting and distractions do not always trim those thoughts from this overactive brain.

I have learned the best way to counteract that state of almost no return, surprisingly enough, is to keep advocating. Unfortunately it is a double edged sword--think about cancer and brainstorm ways to raise money; or not think about cancer and banish those ever present thoughts from my mind ( or will they still linger taunting me more?).  I choose to face this *&%^%$ head on--my way--and it does help.  It gives me hope that there will be a breakthrough and our fundraising and screaming efforts are getting the message out.

As my astute husband constantly reminds me, "Ride the horse in the direction it is going", so I will get up on my stead and ride until our researchers are confident they can declare metastatic cancers chronic and not a death sentence.  It is what I can do to remember Heather, Maggie, Beth, Shannon, Mandi and on and on--all champions of the cause.

Fatigue--bring it on--nothing like a cat nap and Bam! once again I am ready to rally.

Of course I can not conclude this blog without an appeal to donate to our superhero researchers at UW Carbone Cancer Center.


With all this rain this summer I have been able to squeeze in two swims in an actual lake and not resort to one of the massive puddles located around town.

The first swim was delayed a day due to the above mentioned downpours but was completed on June 29th in Lake Mendota.  We had seven brave swimmers fight through the weeds paddling along until we found a relatively clear area to do the mile swim.  One of the highlights of the day was having my two Michigan cousins and two women from Florida join me on spreading the word.

The main highlight of the swim was the abundant number of donations that generated a whopping $4,700 in donations and, along with the match, contributed a ginormous amount equaling $9,400 for the researchers to do what they do best--finding a cure.  Thrilled beyond words at the generosity of everyone.  We are making a difference! 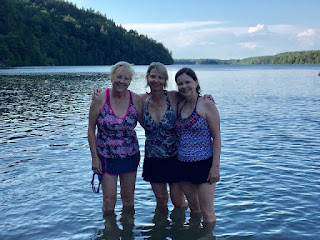 The other swim was in Echo Lake in Acadia National Park in Maine.  Saying it was a lovely place does not quite capture the beauty of the area in a few words. Clean crisp air enveloped us as we made a brisk dash in the limpid sixty degree water.  It was not a long swim--we were on a vacation time constraint and the lobster dishes were calling our names.  As we hurriedly exited the water we discovered a loon making his/her nest in the weeds near shore.  It was a perfect way to end this splendid swim.

If the weather cooperates and the stars all align I'll be swimming in Long Lake, Wisconsin on August 19.  Join me in the water or donate to the swim.  Both deeds would make me very very happy.

To keep me swimming go to UW Carbone Cancer Center and imagine a great big smile on my face with gratitude.

#529 Ladders Smadders--What were you thinking?

When you receive a cancer diagnosis it seems everyone wants to make you feel better by telling you the following declarations:

1.  You could get hit by a bus.
2. A bear could eat you--Heather's favorite.
3. No one lives forever (true, but, unfortunately terminally ill people have a big mark on their forehead).
4.  A meteorite could fall from the sky and wipe us all out

You get the idea.  Yes, we all have this one life and possible disasters surround us but as a metster I take great care in avoiding situations that might put my life in any kind of peril.

The latest Gooze incident was a heart stopper and I pause for a moment contemplating all the possible catastrophes we never see coming.  This one involved none other than my beloved somewhat of a non risk taker husband.  He has been my caregiver, my biggest cheerleader, my (fill in the blank with any dynamite adjectives)-you get the picture, he's pretty special; however, once in a while common sense escapes him and this time it could have resulted in a huge life changing mess.

The recap of the story began when I was gone for the day and on my return discovered bloody scrapes on his leg and hands along with a bent gutter and a water soaked deck.  As he blurted out an explanation of his misadventure I realized it could have been much worse but instead of being the sympathetic wife, I proceeded with a lecture on "what could have happened, might have happened; and are you nuts you could have killed yourself" reprimands.

His first mistake (and there were many) was he climbed a ladder--that is a big "no no" especially if you are terrified of heights.  Do not do it.  Second mistake was I was not here to tell him not to climb the ladder or at least be there to hold the darn thing--he knows better. His third blunder that almost could have done him in was cleaning out the gutters with a hose which consequently drenched the deck rendering it as slippery as your local hockey rink.  He's a smart man--what did he think would happen?

No one was witness to the disaster because it happened so quickly when the ladder's footing succumbed to the slimy wet mess generated by Rob's efforts to get rid of the leaves. Within a nanosecond the contraption came crashing down with poor wide eyed Rob hanging on to it for dear life.  Shaken but alive he regrouped and, if you can believe it, got a different ladder and attempted the cleaning-- AGAIN.

As I said before, $h*t happens and sometimes you are incredibly lucky and sometimes you are not.  This time around he lucked out with neither a bear eating him nor a ladder mangling his body.  Let's hope he thinks twice before he climbs those steps and remembers my wise words about falling from obstacles that could wipe you out forever.  Good grief is all I have to say.


I recently received an unexpected letter from Speaker Paul Ryan regarding my upcoming swim and wishing me well as I advocate for more funding for metastatic breast cancer.  His acknowledgment of the importance of research is commendable and I appreciate being given a pat on the back for our commitment to finding a cure.

Without getting too political (too late) I am responding to him on what it will be like if the current health bill passes the Senate.  We have all been bombarded with the facts--millions will be without coverage.  Our metastatic sisters and brothers are in jeopardy of losing major support to combat the financial toxicity of this disease.  It will be an earlier death sentence for many of us if we can not afford the drugs and treatments that have been extending our lives for a few more months or even years.  Will he hear my response that he can not allow this to happen?  Will he heed the burden this bill will place on families who struggle with lost wages due to this illness but also be cognizant of the skyrocketing price of drugs that we require every month?

We have all witnessed caring communities around this great country of ours who rally around those who are suffering.  Now--this very moment--we must join hands, grab our phones or our computers and write, call and scream loudly that this monstrosity of a bill will not help our fellow human beings.  Please, please, please contact your legislators in Washington and tell them to vote NO.  Tell them to go back to the drawing board and, with charitable hearts, consider their constituents need to have affordable health care and the chance for a longer life without sending their families into bankruptcy.

If you are still not convinced, read this article which goes into detail on where the money is being cut and who will benefit from those cuts-- NBC News on the health care bill.

Did any of this infuriate you at the injustice to so many? No more wringing of your hands.  You can do something about it by going to these websites and locate your state's legislators' names and phone numbers - U.S. Senate: Senators of the 115th Congress and The House of Representatives.  Call and/or write today.  Our lives depend on it.