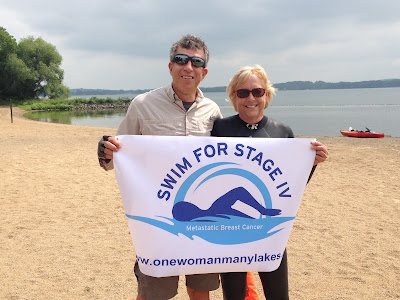 We are days away from October and you know what that means--BREAST CANCER AWARENESS MONTH.  The stores are filling with enticing pink stuff that will make you feel good about supporting those of us living day to day with this disease but I implore you to think twice before plopping down your hard earned money if you think it will help.

Investigate first on who will benefit and how much of your money will go to research. I admit I am biased but it is now time to focus on what kills us--metastatic breast cancer. We get ONE day this month (October 13) to scream outrage against the minuscule 7% of funding directed for us. Unfair?  You better believe it so go to my website at One Woman Many Lakes  and discover why research is our best hope.

Next visit this link It's about time MBC.  If you have followed my blog you've heard my story so I encourage you to read about the remarkable women and men navigating through life with metastatic breast cancer.  The stories will touch your heart about the unifying theme of the importance of more time with their families.

Now back to my ranting.  Please, please stop with the boas and the underwear and the do dads that declare all purchases will support those with breast cancer.  Give directly to a research organization and be assured your donation will save lives.  Let me suggest you check out the More For Stage IV fund at the UW Carbone Cancer Center who gives 100% to the researchers so they can focus on giving us that precious commodity of time.

Scream loud and often is my new mantra so hear me roar once more ( and feel free to join me).

#535 Across the Pond--The Ireland Swim


Well, I'm back after a mini break and a jolly lope through Ireland.  A quick recap:  Couldn't drink the Guiness (gave me tummy troubles but Rob certainly made up for it), swam in Lough (Lake in English) Corrib, now have more knowledge about hurling, gaelic football and rugby than the average American, biked on Aran Islands and overall had an amazing time.  Those Irish lads and lasses certainly know how to treat foreigners--everyone is a friend--we should all aspire to their kindliness and all around good nature. 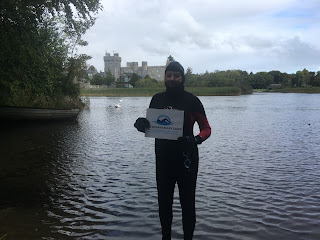 Did I mention the swim? Check this one off the list of freezing one's you know what off.  Our driver, Don, was a champion locating a wetsuit and finding a good entry point for me complete with a scenic view of a castle.  Of course Rob was the gallant knight traipsing through the brush trying to pinpoint my exact location since a boat was not available for him to crash...I mean... lead me through the water.  I was close enough to shore so never felt in danger of drowning but the best husband ever thought it was necessary to try to follow me from shore--where there was no path.  So, up and down he ran and popped out wherever there was an opening.  My swim was no more than 3/4 of a mile yet he must have run close to five miles over and around the hills.

The water was crystal clear and with the first face plant I realized the frigid 59 degrees would necessitate a speedy swim.  As I left the shoreline with the Ashford Castle in view, two swans parted their way and I swam between them--felt like scene from a movie.  Despite the dramatic beginning it was an uneventful swim, however, I did see a vast amount of garbage beneath the water's surface.  The Irish version of the Lock Ness monster in the form of a bike, poles and various other articles.  People--universally--are sometimes inconsiderate stooks (Irish word for fool).

Meanwhile, as I progressed through the almost frozen lake, Don was at the designated end point frantically waving his arms so I could see the direction I should be headed.  No worries that I would keep going since by that time my feet felt like they were beginning to turn green (The Irish blue) and swim number 35 was soon in the record books.

The craic (fun) of a good day for us, no rain at that moment; and while I only had Don cheering me on (and, of course, Rob running through the bramble), another priceless memory in Ireland was stored in our brain's hard drive.

Today I am sending a big shout out of thanks to our many faithful friends for our August burst of fundraising.  The total amounts are not in yet but we know it is substantial and will provide significant funding for our dedicated researchers.   Imagine 100% of all your donations going directly into research!  Thank you for being part of the solution and making a difference.

We also extend an abundance of gratitude to Teri and Dave Mills, Cathy Waskowski, Di Huibregtse, Kris Euclide, Karin Mahoney and Adam Balin and the Fossum family.  They opened their hearts and homes to provide us with an avenue to spreading the word and raising money.  We were fortunate to have some of the finest researchers from the UW Carbone Cancer Center to join us and explain their work in the labs.  All events were inspiring and rewarding.

Another act of selflessness and extreme thanks goes out to Liz Van Kampen and the crew at SprintPrint,  They have been unbelievable supporters providing us with numerous fliers, brochures, signs—you name it and they are on it.  We have never heard them say “No, we can’t do it”,  and for that we are forever grateful for their generosity.

You can continue this gratitude gushing by donating to www.onewomanmanylakes.org.  Our rock star researchers will be doing flips when they see the money rolling in!