Sometimes it is difficult to admit that maybe I was wrong.  Okay, most of the time it is difficult but when it comes to being really wrong I will eat my words, apologize and be forever grateful that my loving husband didn't listen to me.

It began Sunday around 10:30 AM after my morning swim.  Stepping out of the shower I was suddenly doubled over in pain with the thought of, "What the heck?"  I attributed it to the funny way I was standing or some other nonsense I make up to justify an unusual pain.

"Forget about it," I said, "and let's go out to brunch at my favorite cafe place in town."  After two bites of my much anticipated out of this world plate of the finest French Toast, I had had enough and watched (in slight dismay) as Rob finishing off my delicacy.

Fast forward an hour later as I am sitting on the couch at home in a fetal position feeling I was again experiencing  the worst part of childbirth pain when Rob announced that we are going to the ER--now.

"Oh no, dear", mumbled the tough old bird (me), "let's see if it gets better by tomorrow.  Delay the trip and I promise I will go in but not a minute sooner."

Leap ahead a few more minutes (in excruciating pain) and we are on our way to the ER without me grumbling too much about waiting my official time--24 hours--before succumbing to a trip to see a doctor.  At one point in my younger years I'm sure my mother said, "If it still hurts tomorrow, I'll take you in."

After seven hours, a CT scan and lots of drugs, the doctor announces a diagnosis--diverticulitis--the colon has rather poopie polyps (I swear that's what she said).  Thankful that it hadn't burst or exploded or whatever the next step might have been, the doctor casually mentioned that it was a good thing I came in when I did and didn't wait 24 hours.  That hurt almost as much as the gut wrenching pain caused by my disgusting colon and its bacteria filled polyps. Fortunately Rob did not say the customary, "I told you so", but I thought I detected a satisfied grin creeping up on his face. The fact is  he was right and I could have been dead wrong; well, not completely dead but miserable with a possible surgery and major complications if we had used my time frame.

As I said before I hate it when I am wrong but will definitely let this one go.  A lesson learned that my life saving husband may not have a medical degree but his ability to google a malady--he discovered a wide range of possibilities--and then convinced me to head to the emergency room shows that I am not the only tough old bird in the house.

Now back to my chicken broth liquid diet that makes me gag and may possibly do me in anyway.

Holy Toledo! What a woman!  Carol Chaoui, in her words, "values each day and doesn't get caught up in nonsense".  But that isn't what makes her so extraordinary.  What is heroic about her is after getting THAT phone call she grabbed her running shoes and showed cancer who is boss.

It's not my kind of running or jogging--working up a sweat for a 5k.   It's running marathons with not one, but two stage iv diagnoses--thyroid cancer and metastatic breast cancer.  A double double whammy.

Pick yourself up and keep going--a lesson for all of us. Thanks for this, Carol.  We are all cheering from the sidelines and if it gets us off our duffs and get physical, you've done your job.

Read more about this phenomenal woman in Runner's World.

Perusing the internet, there are a multitude of resources and support groups for women and men living with MBC. They often are a closed group who are compassionate listeners and offer free advice on anything including side effects from your drug to an electronic shoulder to cry on when needed.

The groups are unique with contents ranging from a strong belief in their faiths to being downright pissed off and doing something about this on their own.  This last group of women/men has appealed to me with their rattling of cages and making noise to get heard.

Metup is my shining star for getting things done and moving people in the right direction with two powerful leaders at the helm and a bountiful of backers pushing them on.  Jennie Grimes, one of the cofounders, is at the NBCC convention this week to rally our cry and ask/demand answers to why we are not counted and acknowledged.  I applaud her efforts and support what she is doing for the rest of us living day to day with this disease.

Please take the time to read Metup's demands asking for more and support us by writing to these organizations with questions about the status of stage iv and what they can do to help us.  Joining our hands together will make us more powerful and we need your hands to clasp with ours to get through one more day/month/year.

Go to Metup Demands NBCC Do More.  Time is not on our side so act now to see how you can help.


Her simple but sincere question made me pause for a moment.  "How do you keep going, I mean, isn't it daunting to deal with every day?" I muttered some response about staying optimistic because it beats the whiny downtrodden grouch I could easily become.

In reality, those dark moments swirling in my head can surface out of nowhere. It's like a tornado-- unexpected flashes of havoc that leaves me dodging the flying debris that seems to penetrate my entire being.  Why, what if, when, how????...those words and visions of what's to come scares the *&^&^% out of me and renders me towards a dark funk while I cover my head as the storm cloud passes through.

Our hike yesterday (Hike for Hope benefitting the City of Hope Hospital in California). 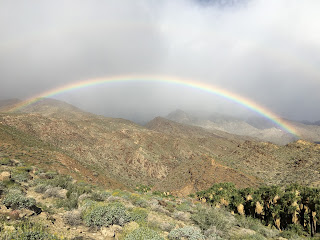 Joining the crowd of super supporters and being presented with a glorious rainbow stretching across the canyon brightened the skies and spirits for all of us. The swirling darkness of the tornado slowly slipped away as thoughts of better things to come raised its comforting head.  There will soon be a baby to be loved and the highly anticipated wedding to celebrate. The thought that life is too short to huddle in the basement of emotions waiting for the passing of the storm clears my head.

I suppose there will always be a momentary pause in this now cancer laden life and then I must remember to move on and look for the rainbow.

To keep those rainbow moments coming--go to www.onewomanmanylakes.org and donate to METAvivor or ACS.