#558 One Trium Perfectum (The Rule of Three) 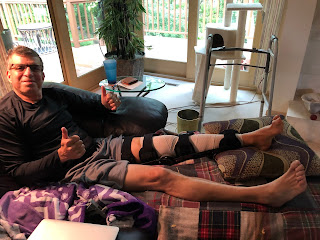 As year number five approaches with this *#$&(@% disease, my plan was to take it on in full force by swimming, walking a 5k to raise money for our More For Stage IV fund at the UW...  and writing a blog on how to live life to its fullest while dealing with MBC.  Yeah!  I'm still here!

The mistake was making a plan.  Ha! What a fool!  Plans have minds of their own and cancer or other life maladies don't wait for the best time to enter our lives.  In a somewhat brief summary I'll fill you in on the trials and tribulations of the Gooze Gang--there are three of us in this situation of mishaps and the phrase from, Things come in Threes,  says it in a more positive way than I think what is currently happening but it seems appropriate nonetheless : "From fairytales to hollywood blockbusters, “the rule of three” (Latin-"omne trium perfectum") principle suggests things that come in threes are inherently more humorous, satisfying and effective than any other number of things. "

With that said, I'll start at the beginning of this saga when, last January in California, I had heart issues and spent some time with the ER docs and stress tests and everything else they could throw at me.  By the way this isn't even number one yet, but I digress.  The heart was good so my current treatment dosage, which had many side effects, was reduced to see if that would help.  It did...for a short time and then after arriving back in Wisconsin, the old ticker started reminding me that all was not well in the chest area.

Jumping ahead, my favorite onc immediately took me off the treatment and scheduled another cardiologist exam.  My cardio cath was scheduled for Wednesday of last week to possibly put in a stent or some other procedure deemed to cure me once and for all.  This is only the precursor of the list of threes--I think this makes it a -0.

The previous Wednesday, my BHE called me from the ER after suffering an injury from a high leaping (according to him)  tennis fall.  It turned out to be a full fledged torn quad tendon catastrophe.  Ugly situation to say the least but after an ortho appointment and an MRI, he was to have surgery to repair his leg on the next Tuesday.  With two months of no driving, six months of recovery with PT and the entire time with a brace that won't let him bend his leg, the BWE (best wife ever--that's me) will be designated as his chauffeur, bather, cook and everything in between.  His status of BHE hasn't really slipped but now the roles have switched me from care receiver to care taker.  A role I am not quite ready to handle.

So Tuesday was his big day for tendon repair--an outpatient surgery but painful especially for him (no comments on man pain vs woman pain) and I would be by his side to comfort and care for him until Wednesday. Unfortunately, the day before-- Monday morning--my chest pain became enough of a concern by my good friends and Rob that they carted me in to the ER to have me checked.  To make this saga a tad shorter, I spent the night and had the cath on Tuesday so both of us were in the hospital having procedures done on the same day.  No, we did not get a discount with a two for one stay.

The good news in this adventure is my heart is fine, the lungs didn't have a blood clot but they still don't know what the hell is wrong with me--other than the cancer is still there.  Rob, on the other hand, is slowly discovering the miracle of pain killers and how important they are after surgery.  He will survive this unless... no I really wouldn't hurt the man I love (I must keep reminding myself of our 40 years of marriage bliss and his past five years of being there for me.  So far his five days of my  caregiving compassionate response to his whining  whimpering  difficult recovery just might equal the whole five years of caregiving I received from him...)

If you recall I said there were three in this comedy of errors calamity.  Our cat decided either the stress was too much for her or else she was looking for some personal care so proceeded to vomit 8 times in a 12 hour period. After trips to the vet on Friday night and Saturday morning and a nice little vet bill, she appears to be suffering from a curable UTI and is now relaxing watching us recuperate.  However, the carpet is a slight disaster but we've already hit our max at the magical number three so will forgo worrying about it. 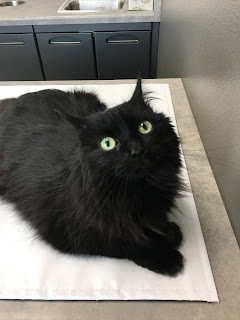 We are now struggling our way back to the new normal in our home but thanks to the generous outpouring of love and food from our friends and neighbors, we will endure.  Everyone has stepped up to the plate to make sure we are mending and still speaking to each other every evening.  Phew!  What a ride.  We've paid our dues to the "Comes in three" saying and, hopefully, will look back at this with humor and a satisfied smile. (maybe when hell freezes over I might eventually see a silver lining in this shit storm!).

Stay tuned.  Never a dull moment at the Gooze household.